Read for free: A Twilight's Promise

"What if your life isn’t a multi-chapter epic… but simply a sad, single page?" 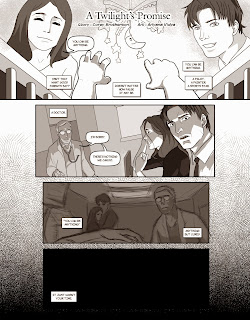 This was both one of the easiest and hardest things I've ever written. Back in 2006 I was asked to write a one page story for a new publication. The idea was that a variety of creators would create these one pagers to fill a larger book, acting as a showcase of comic book vignettes. As with many things of this type, the publication fell through before it could be finished but I thought the idea was sound and the challenge of crafting a story in just one page appealed to me. And so A Twilight’s Promise was born. So to speak.

I try to write stories to the medium and format I'm in. And when it came to A Twilight's Promise, I thought about what would make a good one page story. I realised that if this story is going to be brief, why not make that the point of the story and its main metaphor? Start it up, and before we even get a chance to know the characters, their aims, their thoughts, we lose them again. A person in their cruel twilight, as it were. I wrapped that up in a setting which we'd all be able to relate to, imagine and sympathise with, not to mention a theme and topic close to me, and that's what ended up on the page.

Ariyana Vidya, the talent behind Butterflies and Moths: Fragile, did the artwork and captured it all perfectly - the pace, the emotion and even some of the visual effects I described in the script. It's not the most pleasant of stories and certainly my most depressing to date (however, there are a few future stories now vying for that crown) but it's meant to be bleak. It's meant to catch you in your gut and make you ask 'why'. It's meant to be far briefer than it is fair.

Despite the whole story being available to read here, I'd still recommend picking up an issue or two of Tales from the Plex (http://www.indyplanet.com/store/product_info.php?products_id=2962&osCsid=0hfph2dpeu3e9npdut05ocvvi7) as well. There's a lovely range of styles and stories there for everyone and worth the rather small cover price (especially given how pricey mainstream comics are getting these days).