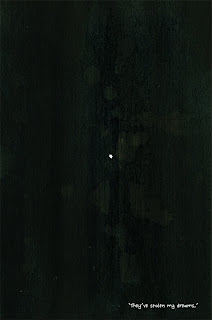 Butterflies and Moths, page 1 - by Corey Brotherson and Jen Gyllblad
With gamescom, stag dos, weddings, and various trips making the past couple months something of a blur, I’ve finally had time to sit down and gather my thoughts for a few seconds. Although the funny thing about reflection is sometimes you stare too long and don’t get anything done… 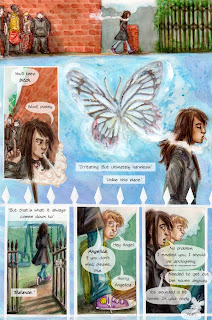 Butterflies and Moths, page 6 - art by Jen Gyllblad
Well, Layer Zero: Survival was declared dead. And The Sleepless Phoenix: Survival Stories arose in its place, featuring many of same creators looking to get their work out there. Which is where The Twilight Cleaner will now be published. The anthology will go on sale next month at the British International Comic Show (BICS), where a number of the creators (myself included) will be on-hand to sell and sign the book. We had to raise a fair bit of cash to get the book on the road, but the target has been fulfilled and so the anthology is ready to go to the printers. If you want to pledge something or check out more information on the book, pass by here: http://www.kickstarter.com/projects/910305588/the-sleepless-phoenix-comics-anthology. The likes of Lauren Sharp and Michael Moreci have really pushed this whole thing onwards at an early stage, and deserve massive credit for getting it off the ground, along with many others who have promoted the book hard to reach its pledge target. Expect more information on the book closer to launch, and if you’re visiting BICS, do feel free to stop by our stand and have a chat. 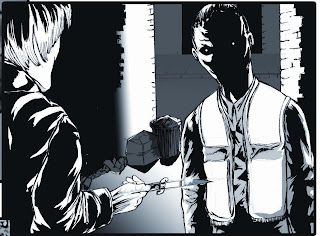 The Twilight Cleaner - art by James Daniels
Graphic novel Butterflies and Moths is another story altogether. Jen and I are currently polishing off the first chapter and preparing it for a few pitches. We’ll see where that takes us. We’re not taking the news of Insomnia’s demise as a negative – we’re still going to push on with what we can and hopefully see it through to the end.
In other comic book related news, I managed to interview Steve Niles (of 30 Days of Night fame) at gamescom 2010 for the newest F.E.A.R. title. A really nice and terribly supportive guy – you can read the interview here: http://uk.playstation.com/ps3/news/articles/detail/item302581/F-3-A-R-writer-interview/
Oh, and while I’m here, I got my copy of Futurius’ The Darkling in the post recently, and it’s lovely. And I’ve got a guest appearance in it, bizarrely enough! You can buy it here: http://www.indyplanet.com/store/product_info.php?products_id=3911. Futurius also re-released Tales from the Plex 2, which features my very first published story, Bad Luck Inc. with artist Yui Marr. You can buy that here: http://www.lulu.com/product/paperback/futurius-tales-from-the-plex-2/12552541
Finally on the four colour front, Magic of Myths has been doing well. With the first three free issues done, Sergio and I are hard at work on the final three issues to launch the eventual mini-graphic novel in the next 6 months. The ebook has clocked over 1,000 visits and continuing to rack up hits, which is great to see – you can check it out over here: http://www.myebook.com/index.php?option=ebook&id=39996. Meanwhile, the official site will be offering previews of the forthcoming graphic novel and news in the run up to its release. Pop over and say hi…
Lastly on a whole, I recently got my hands on my long awaited (2 years!) Pandora handheld device. And it’s superb. Any machine which lets me do writing, watch some DVDs on the fly, switch to a bit of gaming from the 8-bit and 16-bit era with excellent controls (my copy of Full Throttle is getting a lot of play right now), listen to music and go online (with touchscreen functionality and TV-out), all while fitting into my back pocket can only be good. There’s limited availability of the machine, but if you’re an older gamer who likes to have PC functionality literally in your pocket, it’s a veritable dream-machine: http://www.openpandora.org/
I’m sure I’ve forgotten to mention something else in this entry, but it’s gone on for long enough anyway. Hopefully catch you soon…
Posted by Unknown at 12:00 PM